If you would like to donate or tip us please visit:

We appreciate our fans, thank you so much. 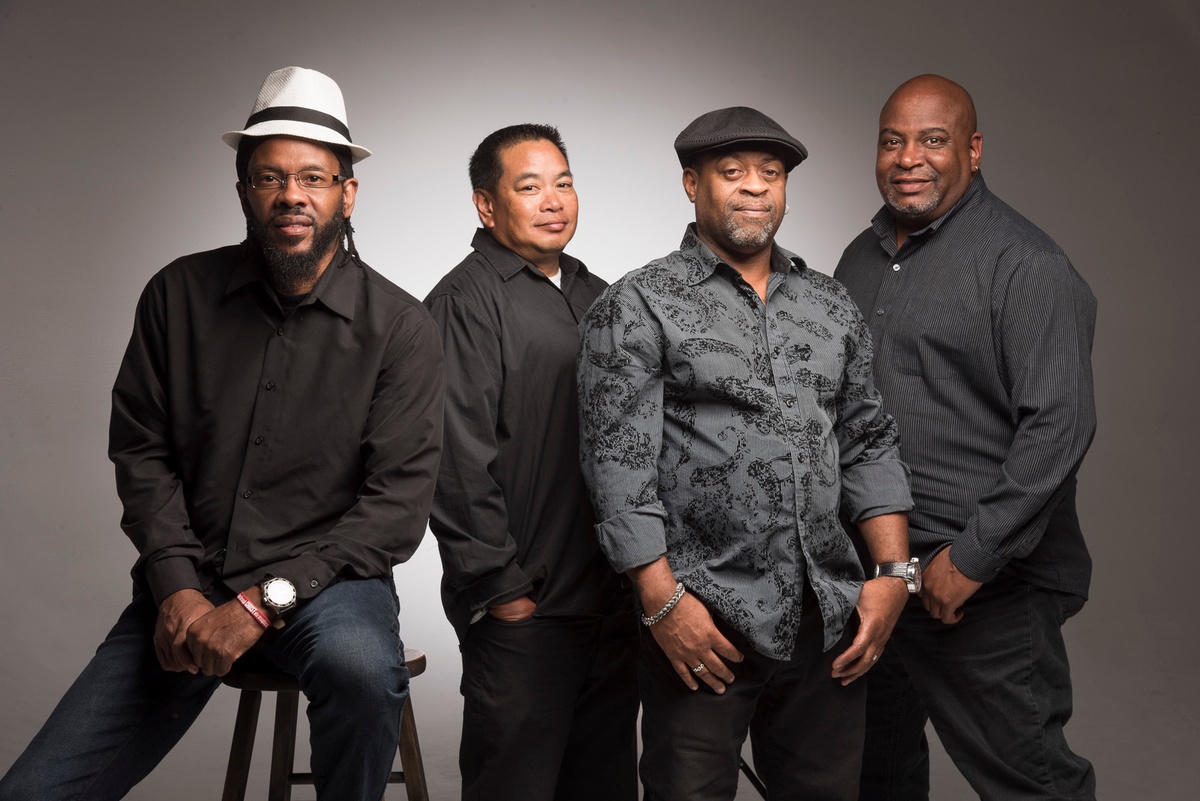 The Joint Chiefs are one of the most versatile and exciting dance bands currently performing on the Northern California music scene. Since their inception in 1990, The Joint Chiefs have built a loyal following based on their live performances as well as their wide range of styles and influences.

Their sound fuses elements of funk, acid jazz and classic R&B with their own signature groove. The result is a dance party of infectious grooves.

Since members of the band were raised on 70’s funk, the band is able to capture the real natural funk feel that all the other bands try to imitate.

With a repertoire of over 200 songs and a history of hundreds of performances in the Bay Area’s most popular venues, The Joint Chiefs play everything from low volume instrumental jazz to full blown dance crazed funk. In addition to the nightclub and dinnerhouse venues, they have become a favorite for weddings, festivals and corporate parties.

The Joint Chiefs have amassed an impressive resume of performances. One listen proves this band can deliver the goods on disc as well as on stage! 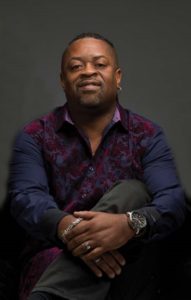 Given his first guitar at age 7 by his musically accomplished parents, Don began displaying his ability in their family church, where he began cultivating his talents. Being completely self taught, his first challenge was mastering a right handed instrument in reverse, using his “dominant” left hand. Although he continued to play as he grew older, it was not until his twenties that his interest transcended from a casual hobby into a serious and life long passion.

Don’s professional turning point was meeting and collaborating with Ken Colby, A.K.A. “KC”. Don and “KC” put together a band to jam and it went beyond their wildest dreams. Don and “KC” got their first gig backing up “Little John Crisley” (child wonder whom performed with BB King at age 10). The “Jam” became a 6 year gig at JJ’s in San Jose.

Don has been nominated, on more than one occasion for Best Guitarist by South Bay Blues Society. Amidst a full time career in the construction industry to support his family, he remained consistent and dedicated to the band, maintaining a full schedule of gigs. He has diligently cultivated a unique original sound and continues to perfect his already masterful skills. Specializing in “Old Style” funk and distinct rhythms, he impresses audiences and fellow musicians with his effortless and unmatched chord progressions.

Don has worked and played with such greats as: Dale Ockerman of the Doobie Brothers on his latest CD, “Piece of my Mind”. Don has also toured with Severn Records recording artist Lou Pride on latest album, “Keep on Believing”. Sista Monica Parker toured with the band extensively since 2005 and to date. Tony Lindsay of Spangalang (lead singer from Santana). Buddy Miles (Jimi Hendrix and the band of gypsies). Terence Blanchard, whom requested to sit in on a Joint Chiefs Band performance. Narada Michel Walden, song writer, producer, musician. Ronnie Baker Brooks, Chico Banks, Bernard Allison and other legends on the 2007 Rhythm and Blues Cruise, just to name a few. Don’s influences started with his father, Don Caruth, Sr., a blessed organist, and his mother Janice Watkins, an accomplished pianist/singer. To mention a few others like Jimi Hendrix, Larry Carlton, George Benson, Jimmy Smith, Stevie Wonder, Cornell Dupree, James Brown, Marvin Gaye, Kenny Burrell, and Albert King. While he plays various guitars through out his gigs, he favors his Fender Telecaster. For amplification: Music Man and Fender Bassman.

Bill has been playing the saxophone for 35 years; a successful result of the California public schools instrumental music programs of the 1970s. He has also studied saxophone under Professor Donald Trimmer who conducted the CBS orchestra for 30 years.

Bill`s evolution as a professional musician started in the 9th grade when he joined his first working band “Eternal Funk” that band was a very successful dance band playing events and clubs where he had to either remain on stage, go outside or to stay in a designated area between sets because he was under 18 years of age. After high school Bill studied Jazz Improvisation at Foothill College where he found his Be-Bop inspiration in the music of Charlie Parker and other great saxophonists.

Bill earned his chops teaching saxophone and playing in jazz duets and trios while also hosting the local blues jams and constantly staying on the scene with his current musician network.
He has pioneered the use of playing with a harmonizer in order to get a simulated horn section sound. Bill’s ability to improvise and communicate musical ideals on the fly indicates his commitment to push the boundaries of musical expression.

Bill has been nominated for best saxophonist by the South Bay Blues Society 3 times. Working as a freelance saxophonist he has performed with John Lee Hooker, Lydia Pense, Greg Allman, Kate Webster, Deacon Jones, Albert Collins, James Cotton just to name a few. His strong experienced background performing in Funk, Rock, Punk, Latin, Jazz and Blues bands gives him a wide musical vocabulary to utilize at his discretion. Bill is a true believer for all things associated with the old school and is an advocate for Jazz standards, vintage American saxophones and Classic Chevrolets. 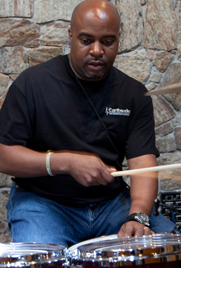 Anthony King was born in Monterey, California. He comes from a musical family and is the youngest of six children. Anthony’s father Jesse Sr. was a drummer in New York in his youth and his mother, a New York native as well, was a vocalist and piano player. She was the director of the choir in the local C.O.G.I.C church in Seaside, California where Anthony grew up. As early as 3 years old, Anthony would sit on the piano bench in church as his mother would play and sing. His older brothers and sisters also played instruments, with his older brother David being the first influence in his life. What made this special is that David is vision impaired and would often be led to the drums with both eyes patched. David had many funk bands in the mid 70s and would let Anthony watch as he controlled the rehearsals with his groove.

Listening to the horn bands of that era; James Brown, Cun-Funkshun, Brass Construction, Earth, Wind and Fire, Tower of Power and the Average White Band, molded Anthony into listening to arrangement, dynamics and pocket. In the mid 70s, Anthony’s father would take the family to the city parades where in 1979, the Blue Devils Drum and Bugle Corps changed his life. A few years later, Anthony found himself auditioning for the Santa Clara Vanguard Drum and Bugle Corps Drum Line. However, due to falling grades in school, his mother made the right decision to pull him away from that activity.

After high school, jazz fusion was a influence and two very important recordings would change everything for Anthony. Road Games by Alan Holdsworth and Slow Motion by Andy Narrell. Both drummers on those records, Chad Wackerman and now great friend, William Kennedy, opened his approach to music and dynamic control in drumming with keeping the music first and staying honest to the original arrangement and being flexible enough to keep it creative and accessible.

Anthony is occasionally performing with Grammy Award winning vocalist Tony Lindsay (Santana, Dancing with the Stars) as well as, Ms. Monet (Celine Dion, Dancing with the Stars). He also has his own band that tours and performs in Brazil once a year, where Anthony also gives his time to teach, mentor and encourage young children sponsored by the American Embassy and Bourbon Street Productions.

Anthony is a mentor to musicians from around the world and takes time out of his day to help others develop as musicians and giving information on marketing and business as well as how to network and build long lasting relationships with both people and companies.

As the newest member of The Joint Chiefs Band, Anthony is excited working with these talented musicians and looks forward to every show and meeting new people along the way. 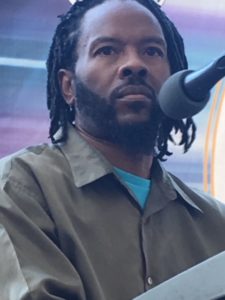 Anthony Cannon Sr. Is a self taught multi instrument musician. Anthony proved to be interested in music at a very early age (16 months) as he would pull pots and pans from the kitchen cabinet and use them as his personal drum kit. Being born and raised in East Palo Alto Ca., had its challenges and Anthony chose music as his escape. Anthony got his start playing drums at his fathers (Elder Boston Cannon Jr.) church at age 6, given his competition from his 4 elder brothers, he switched to piano and then guitar wanting to follow in his mom (piano) and dads (guitar) footsteps.

In 7th grade driven by competition from one of his childhood friends (Michael Turner Sr.) he expanded his instrumentation by learning to play the Violin, Viola and the Cello. High school proved to be a challenge learning to read music, so his love for music took a backseat to basketball and girls. After his college basketball days ended, he threw himself into the music scene starting a recording studio with one of his best friends and writing and producing music for several local artists including a few who made it nationally.

During a recording session the bassist was a no show so Anthony picked up a bass for the first time and laid down the bass tracks for 5 songs given just a few minutes to learn (listen to) each song. Anthony joined his first band at age 19 playing keyboards and singing background vocals and 34 years and a few more bands later, he still has the same passion that he had in his youth, even a massive stroke he suffered on stage in 2017 has not slowed him down, only given him more appreciation for his God given talent.

Growing up Anthony was heavily influenced by such artists as Stevie Wonder, Charle Wilson, and Earth, Wind & Fire to name a few. Anthony continues to write music and is the choir director at Open Bible Baptist Church in East Palo Alto Ca. Joining the Joint Chiefs has been a great experience and Anthony hopes to continue-